Why You Should NEVER Throw Old Clothes in the Trash

Got old clothes you’re planning to trash? You have lots of company. In 2013 alone, Americans discarded 15.1 million tons of clothing and other textiles, and 85 percent of that wound up in landfills.

You see, all those baggy trousers and stained shirts in landfills don’t just lie there forever. They decompose. As they do, they release landfill gas, a toxic brew of air pollutants that includes the greenhouse gases carbon dioxide and methane. 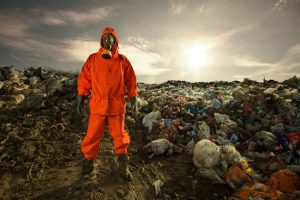 There are about 1,200 municipal solid waste landfills in the United States, Jon Powell, a doctoral student in chemical and environmental engineering at Yale University and an expert on landfills, told The Huffington Post. About 900 of these have vacuum systems that collect landfill gas for burning or to produce electricity.

But a lot of landfill gas is simply vented into the atmosphere. In fact, landfills are the third-largest source of methane emissions in the U.S., according to the Environmental Protection Agency. Methane is known to be 28 times more efficient than carbon dioxide at trapping heat, Powell said. That means it poses a huge global warming problem.

What’s the takeaway? Even if you drive a hybrid car and eat only sustainably produced food, if your cast-off clothes are moldering away in a landfill somewhere, your contribution to global warming and other environmental ills is bigger than you might realize.

Fortunately, the rules for keeping your old clothes out of landfills are simple enough.

“Reuse and repair clothing to the extent possible,” Dr. Morton Barlaz, professor of civil, construction and environmental engineering at North Carolina State University and another landfill expert, told HuffPost in an email. “When no longer usable and not appropriate to give away, use for rags or donate to a thrift store.”

Goodwill and other charities that accept clothing donations will take just about every item no matter how worn, torn or stained. That includes undergarments, so try not to let embarrassment get in your way.

Another option is to check to see whether there’s a textile-recycling program in your area.

Many cities, towns, apparel and footwear retailers now collect and recycle post-consumer textiles, Eric Lubin, CEO of a textile recycling firm in Clifton, New Jersey, told HuffPost in an email. Eileen Fisher, H&M, The North Face and Patagonia are among the companies with some sort of recycling program.

If that’s not enough motivation for you to do all you can to keep clothes out of landfills, consider this: EPA statistics suggest that even modest reductions in the amount of textile waste that winds up in landfills could bring a major benefit to the environment.

In 2013, Americans recycled some 2.3 million tons of textile waste. That brought a reduction in greenhouse gases equivalent to taking 1.2 million cars off the road for an entire year.